From the abstract of the report: 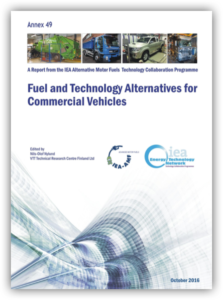 In the “COMVEC” project, eight partners from four continents teamed up to generate new performance data (energy efficiency, exhaust emissions) for commercial vehicles. The work started with the development of a common test procedure. It was decided to use the World Harmonized Vehicle Cycle (WHVC) for vehicle testing and the World Harmonized Transient Cycle (WHTS) for engine testing.

Altogether, 35 different vehicles were tested on chassis dynamometers, with vehicles ranging from light commercial vehicles (vans) to heavy-duty tractors for semi-trailers. In addition, one engine, installed in an engine dynamometer, was tested. The test programme covered several fuel options: diesel, diesel substitute fuels, natural gas, ethanol and even electricity in the category of light commercial vehicles.

With the exception of electricity, the variations in specific energy consumption (relative to vehicle weight) with different fuels were rather small, as were the variations in tailpipe carbon dioxide emissions. There were, however, significant differences in regulated emissions. In the case of regulated emissions, the emission control technology used on the vehicle is decisive for performance, and not primarily the fuel.

The measurements showed that Euro VI vehicles, on an average, deliver really low emissions of nitrogen oxides and particulates, whereas most Euro IV and Euro V vehicles had emissions higher than expected. This leads to the recommendation that countries with less stringent emission legislation in place, when considering tightening requirements, should not go for Euro IV or Euro V, but rather leapfrog to Euro VI, on the condition that high quality fuel is available. The project findings can also be used when setting up requirements for procurement of transport services, such that, whenever possible, they favour services provided by Euro VI (or US 2010) certified vehicles.

Well-to-wheel carbon dioxide emissions depend, first and foremost, on the energy used, not the vehicle itself. Low carbon electricity and the best of biofuels deliver very low well-to-wheel carbon dioxide emissions. A petrol vehicle running on fossil fuel and an electric vehicle running on electricity generated with coal, deliver equally high emissions. In summary, it can be said that vehicle technology determines regulated emissions, whereas overall carbon dioxide emissions are determined by the type of energy carrier (fossil vs. renewable). Euro VI (or US 2010) vehicles, in combination with high quality renewable fuels, are a good choice for local air quality, as well as the climate.

More information about the IEA Alternative Motor Fuels Technology Collaboration Programmeren be found here: http://www.iea-amf.org.
A lot of information is covered via their Project Reports page.