Methanol as a renewable fuel – a knowledge synthesis

Methanol as a renewable fuel – a knowledge synthesis 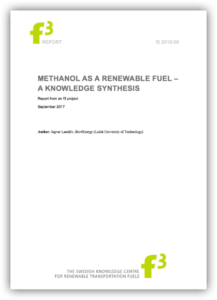 This report is the result of a collaborative project within the Swedish Knowledge Centre for Renewable Transportation Fuels (f3). f3 is a networking organization, which focuses on development of environmentally, economically and socially sustainable renewable fuels. f3 provides a broad, scientifically based and trustworthy source of knowledge for industry, governments and public authorities. f3 carries through system oriented research related to the entire renewable fuels value chain. Last but not least f3 acts as national platform stimulating interaction nationally and internationally.

f3 partners include Sweden’s most active universities and research institutes within the field, as well as a broad range of industry companies with high relevance. f3 has no political agenda and does not conduct lobbying activities for specific fuels or systems, nor for the f3 partners’ respective areas of interest.

From the historical background can be discerned a lack of long term perspective with respect to (a) earlier and current motivation to “use/not to use” methanol as an alternative fuel, (b) experiences gained from earlier periods of methanol usage, and (c) why interest to use methanol as an automo­tive fuel has shifted through the past decades. A newly finished f3 project by Ingvar Landälv, Bio4Energy/LTU, has had the objective of creating a knowledge synthesis with this long term perspective in mind, and also to look forward and address methanol’s potential role as energy carrier/motor fuel in Sweden (and elsewhere).