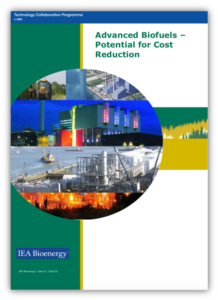 IEA Bioenergy published a report analysing the potential for reducing the production costs of advanced biofuels. The report addresses the necessary e conditions under which these pathways would become affordable. In the report the cost trajectories of advanced biofuels are compared to those of fossil fuels to find out if and when they could become cost-competitive and which policy measures would be needed to close the gap.

The report finds that there is a potential of between 5-27% cost reduction through R&D and learning, leading to reductions in capital and operating costs. Feedstock costs, on the other hand, are more limited and uncertain, as it depends largely on its competing uses. However, as capital and operating costs fall, the feedstock costs would be more indicative of the biofuels’ price. Costs will also be reduced through technology learning, but it is difficult to assess its reduction potential. Although these measures could reduce the gap between fossil and advanced fuels in the middle term, it will remain significant except for some waste-based projects.

The report concludes by emphasizing that continuing policy support is necessary for large scale deployment. This requires support from the industry and support reducing the gap between fossil and biofuels, “either by internalising external costs associated with GHG emissions associated with fossil fuel use or by incentivising low-carbon transport fuels.” Carbon pricing is one such way of reducing the gap. To bridge the current gap with biomass based fuels, the carbon price should be set in a range of 49-525 €/tonne CO2eq.

Some important figures on production costs  are presented in the table below.

This report is an update of a 2017 report that was produced under the Sub-Group Advanced Biofuels (SGAB), as part of the European Commission’s Sustainable Transport Forum. SGAB published a final report in 2017, including an (also updated) technology status report and a cost report (updated by this IEA Bioenergy report).