E-fuels- towards a more sustainable future for truck transport, shipping and aviation

E-fuels: towards a more sustainable future for truck transport shipping and aviation 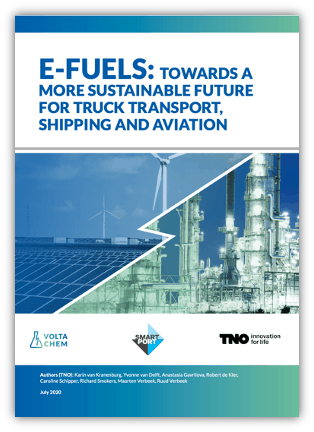 TNO has published (September 2020) a whitepaper on the potential of e-fuels for three modes of transport: long-haul road transport, shipping (inland and short/ long distances over sea) and aviation.  This study analysed the following e-fuels: hydrogen, e-methanol, e-diesel, e-ammonia, e-LNG and e-kerosene.

It foresees market up-take for aviation and shipping after 2030, except for road transport where first deployment could take place some years before.

In terms of costs, the differences between the various e-fuels turn out to be relatively small. Hydrogen is the most economical fuel to produce, but higher distribution and powertrain costs level out this advantage. The costs of producing e-LNG, e-methanol and e-diesel are sensitive to varying CO2 costs, and all e-fuels are sensitive to electricity costs.

From a storage perspective, liquid fuels are the most feasible. E-ammonia requires a larger storage volume than liquid fuels and needs to be compressed to approximately 10 bar or cooled to -30°C in order to make it a reasonable fuel option. E-LNG requires about the same space as cooled e-ammonia but the tank and fuel supply system are more expensive than for ammonia.

The production of e-fuels will lead to a large demand for electricity from renewable sources, water and CO2.
For 2050, the white paper, forecasts for the Netherlands a fuel demand of 960 PJ for international transport modes, (aviation, shipping long haul). If in a theoretical example 960 PJ of fuels is produced in the form of e-methanol, this would require more than 2000 PJ of electricity. Currently, the maximum Dutch offshore wind capacity is estimated at 900 PJ.

A transition to e-fuels production, in this example e-methanol, would further require a capacity of 68 GW water electrolysers, 58 methanol plants with a capacity of 2 ktonne/day each and a feedstock of > 70 Mtonne CO2/annum, which would require extensive DAC installations and probably a seawater desalination plant (since electrolysis requires substantial volumes of water).

In sum, the production of e-mehanol, in this example, will require a significant amount of space for hydrogen plants, methanol production plants and DAC. This shows the considerable challenge ahead for greening molecules for fuels and feedstocks in the large Dutch petrochemical industry.