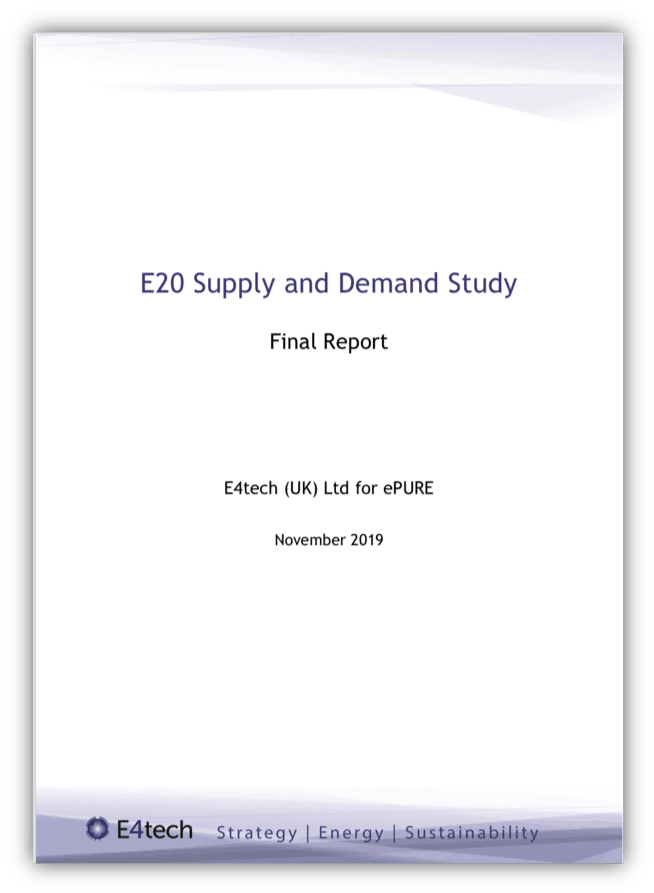 Renewable ethanol has the potential of playing a significant role in the achievement of the EU’s energy and climate ambitions. However, its contribution to decarbonization is limited by the level at which it is blended with gasoline. A report by UK-based E4tech highlights that there are various studies demonstrating that E20 can be safely blended into gasoline and adopts the assumption that most post-2011 vehicles are E20 tolerant.

This report thus investigates the potential demand of ethanol in 2030 if E20 were used across the gasoline pool and how it can be supplied. It is expected that despite a decreasing gasoline demand, the demand for ethanol in transport would increase. In the most likely, “low gasoline demand scenario with 20% market share of E20, a 58% increase (3.2 billion liters) in the volume of ethanol supplied would be required, compared with 2017 supply volumes”.

Sustainability requirements: E4tech finds that the RED II crop cap would not be a limiting factor for the production of ethanol. Even if all ethanol demanded came from crops, its contribution would still be below the 7% crop cap.

Feedstock: In a high demand scenario (BaU demand with 100% E20), an additional 2.4 million hectares of land would be needed to cultivate crops to supply the additional 6.9 billion liters of ethanol needed. For comparison, the land area used for cereal crop cultivation in 2017 was 55.5 million ha. The production of advanced ethanol would require 4.1% of the potential waste and residue feedstock available in 2030. Therefore, supply of advanced ethanol is unlikely to be constrained by feedstock availability, even when taking into account sustainability constraints.

More information can also be found at the E4tech website.