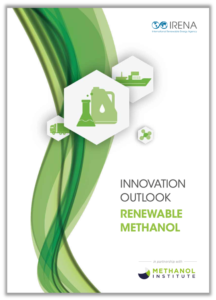 The International Renewable Energy Agency (IRENA) and the Methanol Institute present the innovation outlook on renewable methanol. Within this publication they identify challenges, offer policy recommendations and explore ways to produce renewable methanol at a reasonable cost.

Methanol is one of the four critical basic chemicals – alongside ethylene, propylene and ammonia – used to produce all other chemical products. About two-thirds of methanol is used to produce other chemicals, such as formaldehyde, acetic acid and plastics. Methanol’s use as a fuel – either by itself, as a blend with gasoline, for the production of biodiesel, or in the form of methyl tert-butyl ether (MTBE) and dimethyl ether (DME) – has also grown rapidly since the mid-2000s. Most methanol is currently produced from natural gas or coal, with estimated annual life-cycle emissions of 0.3 Gt CO2, around 10% of the total chemical and petrochemical sector’s CO2 emissions. Addressing emissions from methanol production is therefore a key component of the decarbonisation of the chemical sector and could contribute to the transport sector where the methanol can be used as a fuel.

The need to mitigate climate change and eliminate carbon dioxide (CO2) emissions from all kinds of energy use has prompted rising global interest in renewable methanol. The shift to such types – derived from biomass or synthesised from green (renewable-based) hydrogen and CO2 – could expand methanol’s use as a chemical feedstock and help to make industry and transport fuels carbon neutral. Costs for renewable methanol are currently high, while production volumes are low. But with the right policies, renewable methanol could become cost competitive by 2050 or earlier.

Key recommendations of the report:

The full report can be found here.

Information about IRENA is found here.