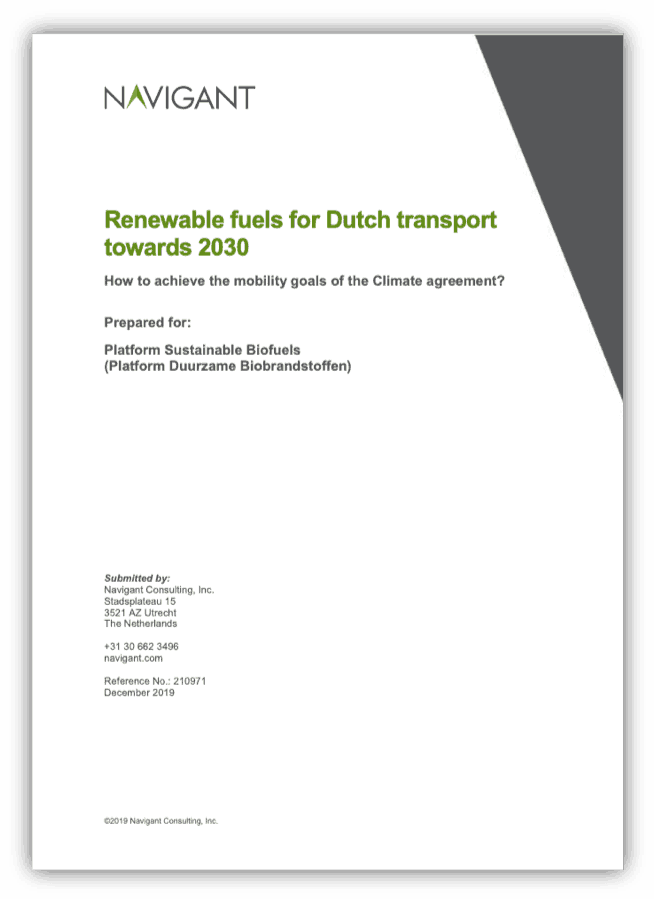 Platform Duurzame Biobrandstoffen commissioned a study, executed by Navigant, to understand how the targets for renewable fuels in the Netherlands transport sector for 2030, in line with the Climate Agreement, can be achieved. Navigant analysed the possible and recommended pathways that the Netherlands would have to follow to achieve the mobility goals for renewable fuels in the Climate Agreement. For the purpose of the study, this translates to an overall goal of 65 PJ of renewable fuels.

The report is now available and can be downloaded here.

From the Executive Summary of the Report:

“The Dutch Climate Agreement (2019) formulates a target of 65 PJ for renewable fuels to be used in the transport sector in 2030.

Many types of renewable fuels exist, and even more are conceivable. They can replace fossil energy carriers without dramatic changes to the energy distribution infrastructure and vehicles. The current global and European production of such fuels is already very large, and the Netherlands can both tap into this supply and contribute to increasing the options and the volumes.

Sustainable biofuels can play a prominent role. They can be produced from a wide range of feedstocks, including crops and organic waste streams. Sustainable biofuels should adhere to strict sustainability requirements and the additional demand should not lead to indirect impacts on carbon stocks and biodiversity. With new approaches such undesired impacts can be avoided, and the legislation can specifically steer for the best performing biofuels. The largest potential for sustainable biofuels is expected from such approaches.

Furthermore, with the increasing share of renewable electricity in the grid, some can be used to produce synthetic fuels or e-fuels such as hydrogen, but also synthetic diesel or gasoline.

The 65 PJ of renewable fuels can be produced with the technologies available today and based on feedstock that can be mobilised today. To allow larger contributions of renewable fuels in the future, innovation should focus on the development of new feedstocks through improved agricultural practices and new conversion pathways.”