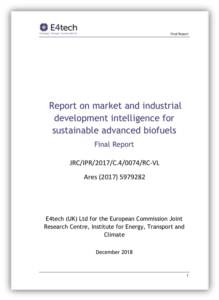 Although advanced biofuels have the potential to result in lower GHG emissions compared with fossil fuels, they are not yet widely deployed. “Many technologies are still at an early stage of development, and support is likely to be important to bring them towards commercialisation and therefore make significant volumes of advanced biofuels available within the EU.” The EU capacity for (advanced) biofuels production is substantial, but it has to be supported by adequate policy.

This is one of the conclusions from a 2018-report by E4Tech, drafted for the Joint Research Center of the European Commission.