State of nature in the EU

State of nature in the EU 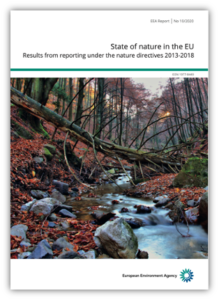 The EU nature directives – better known as the Habitats and Bird directives – form the legal measures and rules that member states have to follow to report the actions take to enforce the preservation of nature in the EU. Due to the deteriorating state of the nature in the EU, concrete actions had to be taken by members states and accountable actors. The European Environment Agency (EEA) published this report to assess the state of wildlife in the EU in 2020 and follows up the progress of the actions taken in the light of the the Biodiversity Strategy of 2020. For this assessment the EEA uses data from 2013 to 2018 to follow up the progress being made on nature conservancy in the Union and uses the output to see which additional measures have to be taken for the Biodiversity Strategy of 2030.

The report is structured as followed:

The report admits data gaps and limitations around the status of nature still exist, making it hard to make accurate assessments and predictions. Therefore, expert opinions and partial surveys are added to the study to increase the significance of the study.

Overall, report states that despite measures being take by the member states, the biodiversity in the EU is still declining. Deteriorating trends from changes in land and sea use, overexploitation and unsustainable management practices, as well as water regime modification, pollution, invasive alien species and climate change all have a negative effect on nature and its wildlife. Concretely, the EEA remarks that the objectives of the Biodiversity Strategy 2020 will not be achieved. The new Biodiversity Strategy 2030 will therefore aim to take even more stringent actions to fill up the gaps left by the Biodiversity Strategy 2020. Ambitious targets will be set to tackle the drivers of the biodiversity loss to reduce key pressures on nature and ecosystem services in the EU.

Despite the overal failure of attaining the Biodiversity goals, progress has been made in some aspects as a number of species and habitats have shown improved status trends. Specifically forests, mammals and birds (e.g. several birds of prey) are among the top beneficiaries of the conservation measures applied. However, these positive developments are not outweighing the overal degradation of the biodiversity in the EU and strong additional measures have to be taken overall.