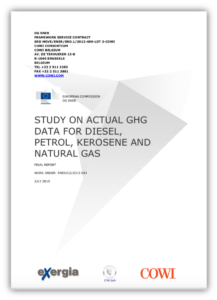 The aim of this EC/DG Energy-funded project was to provide information about the lifecycle actual GHG emissions of oil and natural gas, based on data collection, modeling and projections as well as via validation via market consultation. The project was executed but a consortium of Exergia, E3M-Lab and COWI. The approach was to consider on the one hand indirect GHG emissions of fossil fuel streams  and as an alteratie determine the direct Carbon Intensity (CI) of the oil and gas pathways. The study also assessed the GHG emissions associated with fuels projected to be consumed in the EU up to 2030, with emphasis on the period up to 2020.

The study finds that average refinery emissions are projected to be reduced by 4% in 2020 and by 6% and 9% up to 2030 under the reference and decarbonisation scenarios, respectively. On the contrary, the estimates on upstream and midstream GHG emissions of gas supplied to the EU show an overall increase in CI values in 2020 and 2030. This is partly due to the fact that the gas is sources from more distant regions.

The study takes into account feedstock from all continents and addresses the processes of producing, transporting, manufacturing and distributing a number of fuels suitable for road transport powertrains. A comparison between European and foreign refineries is also made to show the differences in the GHG due to transport.

The study concludes that Well to Tank (WTT) carbon intensities vary widely, depending on how the crude is produced, the amount of gas flaring, the amount of fugitive emissions released during production, and the emissions from oil refining. It is found that crude oil refining is the most energy-consuming step followed by crude production. However, total refinery emissions are expected to be reduced by 11% and by 18% in reference scenario for2020 and2030 respectively, andby23% in the decarbonisation scenario for 2030.

Based on the results of this study, some recommendations were drafted, emphasizing the need to substitute fossil fuels with sustainable fuels to reduce GHG emissions in transport. It is mentioned that the WTT CI of advanced biofuels substitutes for petrol and diesel could justify GHG emission savings. It is also recommended that the FQD be revised to include a maximum value of CI of fossil fuels that would be allowed to be used in the EU.